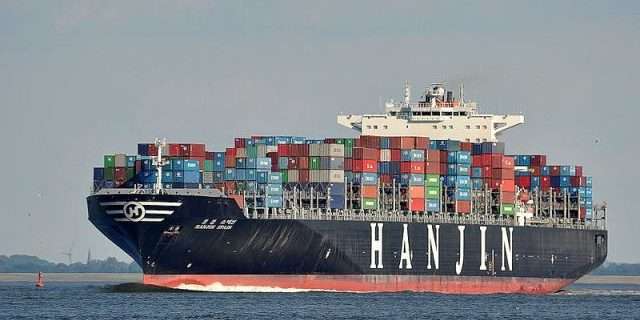 The global shipping industry is in trouble with international rates consistently low for the past five years. The combination of excess capacity and flat cargo growth has led to cruel price wars that have resulted in wonderfully inexpensive freight rates for exporters, but almost no profits for shipping lines. For some vessels, the current day rates are covering less than 5% of costs. Countries have different methods of dealing with the crisis. South Korea: Hanjin's bankruptcy sent shock waves around the world. Hanjin is stuck with $8 billion in debt, have 97 ships stranded around the world unable to pay for fuel or fees, and have $14 billion dollars worth of goods stuck on board. Among the companies affected by the collapse are likely to be Samsung, LG, and even DHL. Teresa Lloyd, chief executive of Maritime Industry Australia said, "These ships cost the ship owner about $18,000 a day to put to sea, some of them have been accepting day rates of $750 a day. They are losing money hand over fist." With an oversupply of vessels in the market, Hanjin had been in financial difficulty since the global financial crisis in 2008. Even the world's biggest shipping lines have seen steep losses in the third quarter of this year with predictions of overall losses for 2016. Now that the stranded ships have finally been unloaded, attention has turned to selling the company's assets. Unfortunately, there will be few buyers for Hanjin's ships as the global market is already oversupplied. When the market was strong a decade ago ship owners were ordering new ships and they are still being delivered today. The government has taken no steps to save the sinking ship. Japan: In response to Hanjin's collapse, Japan's three biggest shippers will merge their container business, and analysts predict more consolidations and bankruptcies ahead with the smaller companies being swallowed up. Taiwan: The Taiwanese government has agreed to a US $2 billion aid package for the country's shipping industry. The relief package will provide some breathing space for Taiwan's leading carriers.

CPC Commentary: Not until the Ocean Carriers stop launching newly built high capacity vessels will the market equalize. The bail-out by the Taiwanese government is a bold move to keep their ocean carrier afloat while global demand ramps up. This cooperation with government is crucial during this crisis and will keep commerce flowing.